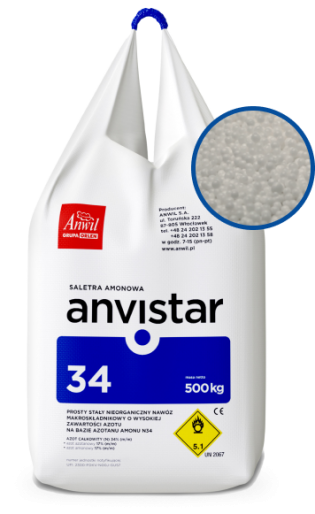 Anvistar 34
Anvistar 34 (ammonium nitrate) is a fast-acting highly concentrated solid granular nitrogen fertilizer that allows you to differentiate the methods, doses and terms of application, taking into account the peculiarities of the soil and climatic conditions and the biological characteristics of the crop. The fertilizer is quickly absorbed by the plant, accelerating the growth and development of plants, increasing the yield and its quality. Fertilizer nitrogen is equally distributed between nitrate and ammonium forms. Additionally, the fertilizer is enriched with 0.2% Mg, in order to optimize the activity of nitrogen metabolism enzymes in plants.
Country of Origin Poland
Packaging Big bag 500 kg, Bag 50kg
Manufacturer ANWIL
Formula N-34%
Properties \ Benefits
More details
Properties \ Benefits
More details

Ammonium nitrate as a fertilizer is suitable for all types of soils and all climate zones. It can be used as a starter, basal and top/side dress fertilizer for a wide range of crops. Applying during spring-summer growing seasons makes better use.

Ammonium nitrate as the basal fertilizer can be applied with spreaders. It should be incorporated into the soil in the shortest period to prevent nitrogen losses due to weathering.

Ammonium nitrate is considered as one of the optimal fertilizers for winter crops and winter rapeseed at the beginning of vegetation resumption.It causes a quick and intensive regeneration of the vegetative mass after overwintering against the minimum soil moisture storage. At this period intensive intake of nitrogen in form of nitrate does not pose a threat to accumulation of it in plant. Undeveloped root system cautiones against the excessive use of ammonium nitrateand sufficient water availability in early spring, because undeveloped root system trails behind intensity of plant growth that is above the ground. There is no such a threat when the root system is well-developed.

It is not recommended to apply ammonium nitrate as the basal fertilizer in autumn due to excessive nitrogen losses connected with washing it out by vertical or horizontal water flow into deep soil layers. Applying of starter fertilizer to winter crops can lead to overgrowing and as a result – poor overwintering.

In case of poor developing of winter crops, ammonium nitrate can be broadcasted on top of plants in order to enhance plant growth that is above the ground and utilize maximum amount of nutrients that provide better overwintering.